When should our Pet be desexed? and is it Spay or Spey.

Many things changed this year, the way we work, how we socialise and our ability to travel.   For veterinary clinics, the "Covid Puppy" has created a large influx of new pet owners and new puppies, with all the questions that entails.  I hope to cover why we desex, when should we desex and whether its truly necessary.   Click here for the Short Answer

Desexing is a medical procedure which we perform on male and female pets that remove the ability of that pet to reproduce.    There are a number of different ways this has been performed historically but now the accepted method of female dogs and cats is :

This is performed under general anaesthesia. 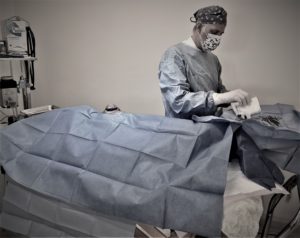 Why do we desex?

The obvious answer here is we don't want puppies or kittens, but there are other reasons to consider.

Intact male dogs and to a lessor extent female dogs - when they are "in season" have a basic physiological drive to reproduce.  This leads them to do some pretty silly stuff - jump fences, run across busy roads, get into fights.  ( I will point out humans are no different - just head into the city on any Saturday night).  This behaviours have a significant risk factor for death or severe injury.

There are certain diseases which I don't think there is any doubt that desexing removes or drops that risk to zero.

When should my Pet be desexed

There are benefits to each of these view points such that nether is wrong but if you are looking for a more in depth answer read on.

Historically desexing became common about 50 years ago - when it was recognised that a large number of unwanted and stray dogs where causing problems around large cities.  At that time the recommendation was to perform the procedure at or around 6 months of age.    A  number of factors weighed into this timing but by far the most overwhelming was that  female dogs will generally experience a season before 7 months of age.  Female dogs are entirely capable of falling pregnant on this first cycle so the view was desex before this could happen as far as male dogs went - they got dragged along for the ride.

In the 90's, pet ownership and the stray dog problem persisted and Animal Protection Societies became involved in the care of many puppies and kittens.  The policies at this time lead to a push to introduce early age desexing - where the procedure was performed as young as 8 weeks of age.  People felt it was more important the get the pets desexed that rely on owner's returning an older pet and desex them later.  Smaller animals were also easier to manage in terms of size and also the inherent costs involved where lower.

Moving into the 21 century, new ideas emerged that became more focused on what was best for the individual dog, we had more data from the previous 50 year which we could uses to gauge the positives and negatives of our various choices.  Now some vets are recommending a late age desexing - which allows the pet to mature with its natural hormone balance intact.

In summary there is not a straight forward answer or a 1 size fits all solution.  Different people have different goals and targets.

Where are we now?

We now understand the puppies and kittens have a lot of development to do after they are born, various organs mature at different speeds.  The skeletal and muscular growth can take as long as 2 years in large breed dogs and as short as 8mths in small breed dogs.   Kidneys also mature at a different rate - kidney maturity we think is pretty much complete at about 200 days of age thats about 6.5mths.  The majority is completed in the first 4 months - you can see this as your pets toilet training pretty much improves dramatically at this age.  They can hold it for the night!  The same applies to the liver development - while no specific animal studies could be found.  In humans, full maturity can take up to 2 years following birth.  Given this knowledge, the advice has to be that we should try and avoid anaesthesia until these vital organs are mature.

Your vet will probably suggest a blood test prior to anaesthesia to confirm healthy and optimal function of these organs at bare minimum its important to realize the test doesn't tell you they are fully mature only that they are not diseased.

The previously mentioned disease risks means we should still desex but perhaps we need to show more consideration for age.

For Male Dogs - these guys can probably wait until 12 months of age  - this will allow a stronger skeletal structure and more robust physical appearance -  for the larger breeds - it may also reduce the incidence of bone cancer.

Fore female dogs - I would probably desex them at 5-6 mths of age - dealing with a dog on heat is often a lot to handle in a busy family with an inside dog - but you are welcome to delay until around 10 months of age - after the first season.  This may reduce the risk of incontinence later in life.  However the risk of mammary cancer is still higher after even 1 season.

I will categorically say I don't believe in early age desexing - I see no benefit to the individual dog or the dog's life long owner.

The correct term is spay and it means to remove the ovaries and uterus in a female dog.  That being said as with all language the alternative spelling spey does get used here in Australia.  You wont find either term common to the lay person in the USA.

Ben Charlton is one of the partners of Kalinga Park Veterinary Surgery and has been the principal Veterinarian at Kalinga Park since the surgery opened in 2008.

This site uses Akismet to reduce spam. Learn how your comment data is processed.