What should you do if your Pet has eaten or been bitten by a Bat or [wiki id=en]Flying fox[/wiki]? 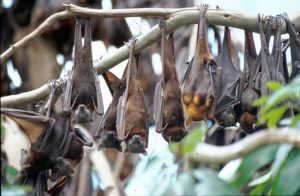 Immediately call us on 07 33571588, there is a specific protocol in place to handle dogs or cats that have had potential contact with a bat or Flying fox infected with Lyssavirus. You can fill out an application for post exposure treatment here.

Should I try and move the bat from the pet?

What Should I do if I think I might have been bitten or scratched?

What can happen if I don’t get treatment or post-exposure vaccination for my Pet?

You can call us and ask to speak to Dr Ben Charlton, to further clarify all of the points discussed above, the Queensland government has a protocol in place we follow to provide the correct treatment for these patients.

So what is this disease?

In 1996 CSIRO identified a new virus circulating in the QLD bat population, it was found to be a close relative of the Rabies virus’s, but it was classed as a Lyssavirus

Australian bat lyssavirus (ABLV) (initially named pteropid lyssavirus PLV) is a zoonotic virus closely related to rabies virus. It was first identified in a 5-month old juvenile Black Flying Fox collected near Ballina in northern New South Wales, Australia in 1996 during a national surveillance program for the recently identifiedHendra virus.[1] ABLV is the seventh member of the lyssavirus genus (which includes rabies virus) and the only lyssavirus family member present in Australia.

ABLV is distributed throughout Australia in a variety of bat species which are believed to be the primary reservoir for the virus.

“Surveillance initiatives also confirmed the presence of lyssavirus in both Pteropid (Gould et al., 1998) and insectivorous bats (Gould et al., 2002; Hooper et al., 1997), and later, human infections were reported following encounters with both fruit and insectivorous bats (Allworth et al., 1996; Hanna et al., 2000; Warrilow, 2005; Warrilow et al., 2002). Indeed, ABLV has now been isolated from five different bat species, all four species of Pteropodidae in Australia and from an insectivorous bat species, the yellow-bellied sheath-tailed bat (Saccolaimus flaviventris), with two distinct lineages apparently circulating in insectivorous and frugivorous bats (Fraser et al., 1996; Gould et al., 1998, 2002; Guyatt et al., 2003). Phylogenetically and serologically, ABLV isolates appear to be more closely related to RABV than any of the other Old World lyssaviruses (Fig. 2). Although the black flying fox is a native fruit bat to Australia and is present on islands to the north, ABLV has only been isolated in Australia. However, serosurveillance of bat populations in the Philippines has suggested that lyssavirus infection of bats might be more widespread than previously thought (Arguin et al., 2002).”[2]

ABLV has caused two human deaths. The first occurred in November 1996 when an animal carer was scratched by a Yellow-bellied Sheath-tailed Bat. The onset of a rabies-like illness occurred 4–5 weeks following the incident, with death twenty days later. ABLV was identified from brain tissue by PCR and immunohistochemistry.

In August 1996, a woman in Queensland was bitten on the finger by a flying fox while attempting to remove it from a child it had landed on. Six months later, following heightened public attention from the first ABLV death, she consulted a GP regarding testing for the virus. Post-exposure treatment was advised but declined. After a 27 month incubation a rabies-like illness developed. The condition worsened after hospital admission and she died 19 days after the onset of illness.

The first day the woman was hospitalised “[c]erebrospinal fluid (CSF), serum and saliva were submitted for testing”.[3] On the fourth day of her hospital admission these tests were returned with results of “probably ABL infection”. Post-mortem tests were all “strongly positive” for ABL. The length of incubation is unusual as classical rabies has typical incubation periods of less than 90 days.

ABLV is one of four zoonotic viruses discovered in Pteropid bats since 1994, the others being Hendra virus, Nipah virus and Menangle virus. Of these, ABLV is the only virus known to be transmissible to humans directly from bats without an intermediate host.

“Dr John Carnie [Victoria’s Chief Health Officer] said Australian bat lyssavirus was a rare but fatal disease that could be transmitted to humans or pets bitten or scratched by bats. But he said only two cases have ever been recorded, both in Queensland. No animal or person in Victoria has ever contracted the disease, Dr Carnie said. Nine Victorian flying foxes have been found with the virus since 1996. “Under no circumstances should people handle flying foxes on their property as some diseases they carry, such as Australian bat lyssavirus, are transmissible to humans,” Dr Carnie said in a statement. Only trained volunteers or workers should handle bats. Anyone who encounters a sick or injured flying fox should not try to catch it but call the DSE Customer Service Centre on 136 186.”[4]

ABLV was detected in a bat found in the Melbourne suburb of Kew in July 2011. The discovery prompted health authorities to issue warnings to Melbourne residents not to touch the creatures.

Most recently 2 horses were identified on a South Qld property as being infected, those animals were euthanased so we do not know what disease progression would have been like, however we can speculate that clinical signs in non-bat animals are likely to be similar to ABLV in bats or the signs of rabies in the non-bat species.  Domestic animals, including horses, dogs and other pets may potentially be exposed to ABLV through contact with bats. The similarity of ABLV with other lyssavirus suggests that, on rare occasions, exposure may lead to clinical ABLV disease. Infection of other mammals could pose a risk of transmission to humans.

Ben Charlton is one of the partners of Kalinga Park Veterinary Surgery and has been the principal Veterinarian at Kalinga Park since the surgery opened in 2008.

This site uses Akismet to reduce spam. Learn how your comment data is processed.